On July 1, 2012 all eyes tuned to Kiev, Ukraine to enjoy the spectacle that is the UEFA Euro Final between Spain and Italy. In February of 2014, eyes glanced pensively on the Ukrainian capital to witness the murder of 77 protesters.

In the quick turn around of two years, a dramatic spell has been cast over a nation that welcomed football fans of many European nations to celebrate one of the world’s greatest sporting occasions. Less than five years after that summer, the country is severely split and in an almost unrecognizable state compared to times before.

After trying to integrate into the European Union but stinted by various political issues, the Russian Federation committed spiteful acts to hurt the Ukrainian economy in hopes to bring Ukraine under its economic influence.

Following protests across Ukraine in February of 2014, 77 protesters were killed in Kiev and President Yanukovych fled to Russia. Next, the Crimean peninsula was annexed and more pro-Russian city takeovers transpired across eastern Ukraine.

The situation is in fact complicated, and even for many Ukrainians it can be tough to follow what is really happening; but this conflict can be described as a war.

Vice News has brilliantly covered the Ukrainian crisis closely and here explains in detail the militarial stance in August of 2016.

According to CNN, late 2016 saw civilian casualties reach their highest point in a year as a result of shelling and mines across the eastern border of Ukraine. Violations of cease fires have been frequently documented and the UN claims that nearly 9,500 people have been killed in the violence since it began in April of 2014.

As a result, Ukrainian domestic football took a hit.

The domestic league had to cut their league size from 16 to 14 in response to fighting in the oblasts of Donetsk and Luhansk as well as losing teams in the Crimean peninsula after its annexation.

Players found themselves moving their families to cities they have never even visited,  playing in stadiums home to their enemies, in front of crowds that were void of all fans.

The country’s most popular team, Shakhtar Donetsk, have even been relocated to play in a Arena Lviv, 700 miles away from the intense fighting.

“We [lost] our homes, our stadium and our fans,” Shakhtar captain Darjio Srna told The Guardian. “We [lost] the training ground and [lost] our city.”

This forced relocation would be the equivalent of having the Washington Redskins play their home games at Soldier field.

It can be pretty difficult to play at your home ground when it has been shelled and transformed into a humanitarian center. 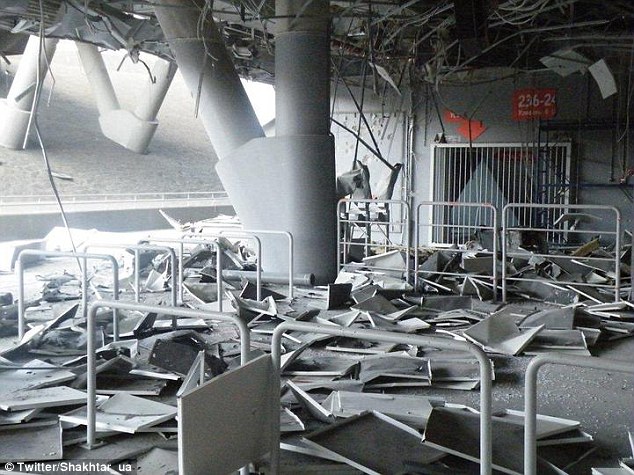 Image of Donbass Arena shelled in 2014.

In a time of such turmoil and despair, it can be hard for a Ukraine soccer fan to find positives.

Shakhtar nearly made it to the year’s Europa League final as a homeless club, only losing to eventual champions Sevilla in the semi-finals.

For Ukrainians that fled west, live abroad, and those that were stuck in areas of fighting and relentless shelling, this was a moment of celebration. For them, Shakhtar represented what they were experiencing: a fight against the odds in which they overcome.

Shakhtar currently sit atop the league during the winter break with no losses and await their Europa League clash with Spanish side Celta de Vigo come February. They have a chance to make it to the semi-finals once again and even further if they can compile a string of wins from now until May.

The club’s billionaire owner, Rinat Akhmetov has claimed that if they felt they would never be able to play in their home stadium again, they would not still be playing. They can take his word for it too, he has helped keep this club afloat in such a turbulent time with his deep pockets.

“I was the only one who believed it would be over quickly,” Srna said. “I told everyone we would be back in six months.”

Although it probably won’t be sooner rather than later, everyone involved with the club is desperate to go back to their homes. But for now, Shakhtar Donetsk represent the Ukrainians who can’t go back to their homes, who have to live their lives 700 miles from where they were born and who don’t know when they’ll ever get their country back.