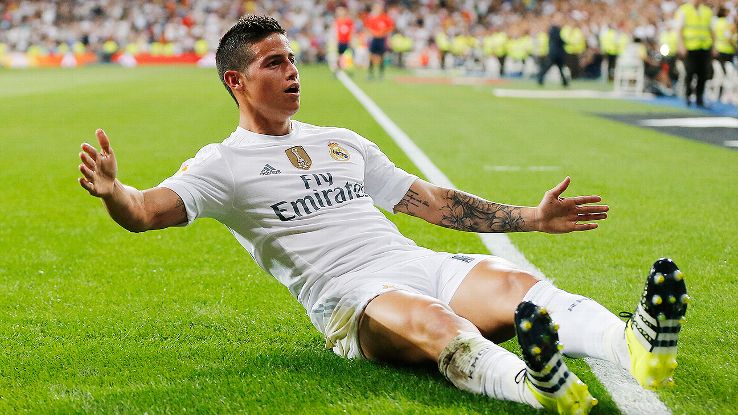 In the past couple days, reports of transfer talks between Manchester United and Real Madrid have increased dramatically.

According to Rob Dawson of ESPN FC, James Rodriguez is being pushed to leave the Bernabeu this summer. On top of the list of potential buyers happens to be Manchester United followed by the likes of PSG and Chelsea.

Since Zinedine Zidane became manager at Los Blancos, Rodriguez has had trouble finding playing time in the starting 11. The 25-year-old Colombian joined Real Madrid from AS Monaco after his breakout performance in the 2014 FIFA World Cup.

This season, he has made 28 appearances and scored 11 goals while assisting eight. In his last 10 appearances he has scored seven goals.

What makes United the front runners in the race for the attacking midfielder is the fact that Rodriguez and United manager Jose Mourinho share the same agent. Jorge Mendes, who also helped the transfers of Cristiano Ronaldo and Nani to United, could very well be the deciding factor in where Rodriguez will end up come August.

Another factor in where Rodriguez will end up is the opportunity to continue playing in the UEFA Champions League. At the moment, Manchester United will only play in that competition if they win the Europa League. PSG and Chelsea are both already qualified for next year’s competition.

United are expected to splash the cash this summer as Mourinho aims to finally mould his own squad by the end of the summer transfer window.

David De Gea could also prove to be a key negotiating piece in what could be the biggest transfer of the summer.

The Spanish goalkeeper has been rumored to be unsettled in Manchester and wants a move back to his native country. This is a move that De Gea has wanted since the summer of 2015 when talks broke down last minute.

With some savvy negotiating, Mourinho might be able to get a trade for Rodriguez while also snagging an additional sum of cash that could be used on other transfers.

With La Liga and the Champions League in the balance, Rodriguez will still be hoping to make appearances in Madrid’s final four or five games.