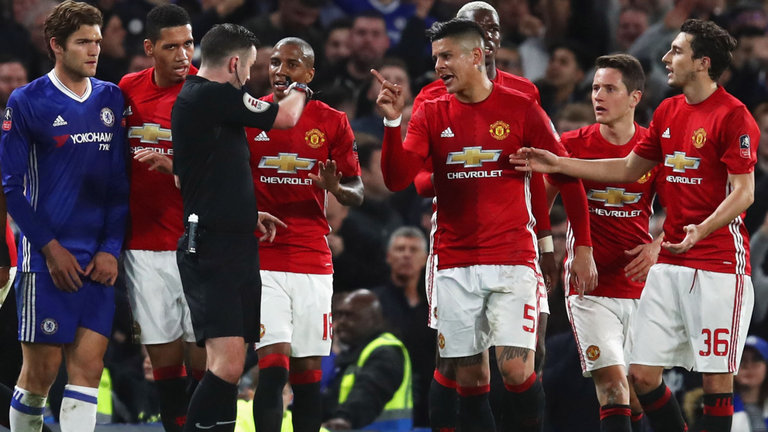 After their 1-0 loss at Chelsea on Monday night, Manchester United Football Club were charged with failure to control their players by the English Football Association.

“It follows an incident in the 35th minute,” the FA said. The club has until Friday to respond to the charge and fine.

The incident referenced in the 35th minute was the United’s reaction to the red card (second yellow) given to midfielder Ander Herrera. Players gathered around referee Michael Oliver after they felt Herrera’s second yellow was wrongly given.

For many United supporters, it was Herrera’s first yellow card that should not have been given.

Standing in the path of Chelsea forward Eden Hazard, Herrera simply did not move as Hazard crashed into him.

That was not the only headline of the night, as both managers got into a scuffle on the touchline mid-game and Chelsea fans chanted profanities at their former-title-winning manager, Jose Mourinho.

This was followed by the now-Manchester United manager claiming that he’s still Chelsea’s number one manager.

“Until the moment they have a manager that wins four Premier Leagues for them, I’m the number one,” Mourinho said. “Until then, Judas is number one.”

It must be said that storylines were plentiful in a game that was rather tainted after the 35th minute decision. United were immediately on their back foot and failed to recover.

The tightness of their schedule also played a part, as some Red Devils were clearly sulking from their consecutive matches.

“I’m really proud of my players,” Manchester United manager Jose Mourinho said after the game. “We have a very important match on Thursday and I want to try and rest [some players].”

United plays in the Europa League on Thursday for their Round of 16 home leg against Rostov.

To read more on Monday night’s game, here are some great articles: