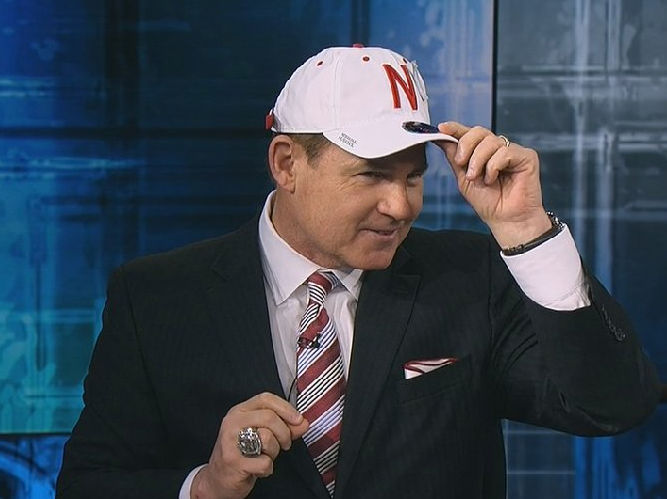 Les Miles put on a Nebraska hat on ESPNU when his son announced he was signing to Nebraska on signing day.

On Signing Day 2017, Les Miles’ son Ben officially signed to play at the University of Nebraska. Les was on the set of ESPNU at the time and showed his support by sporting a white Nebraska hat.

With Husker coach Mike Riley showing he is not afraid to do-away with faulty parts, such as former Defensive Coordinator Mark Banker, a question has risen. If Offensive Coordinator Danny Langsdorf does not get the job done in the 2017 season, will he be given the boot, allowing for Les Miles to assume the position?

Speculative thinking, yes, but it is not an improbability.

Think about it: why would Les Miles not want to come to Nebraska? He would be able to coach his son, get back into coaching at a less-demanding position than head coach and he already owns a stylish Husker cap that he could wear on the sidelines.

Okay, it is pretty speculative but what reason do we have to believe that Riley would not try and get a guy like Miles on his staff? Although seen as a more defensive-minded coach, nothing could be further from the truth. Miles coached the Colorado and Michigan offensive line before getting his chance as Oklahoma State’s offensive coordinator in 1995.

Miles was fired on September 25 after starting the season 2-2 and losing to Auburn, despite LSU fans wanting to keep their coach who went 114-34 during his tenure.

“There are a number of great jobs out there, and I’m not limiting myself [to Power 5 programs],” Miles said to ESPN in January. “I’m a coach. I have so much experience at the things that I’ve done that it would be hard for me to just put those down.” 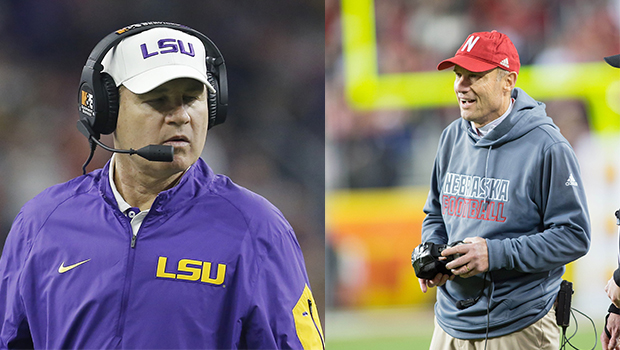 A Miles-Riley duo could be a dangerous one. Whether or not Miles would take an assistant role is doubtful. Photo courtesy of Campus Insiders.

Miles was rumored to be a target for Houston, Purdue and Minnesota but now it seems that his path is as unclear as ever. So why not Nebraska?

It is now February, meaning that most schools have their coaches in locked positions with Spring workouts on the horizon. It is now more likely than ever that Miles will be sitting out a whole year of coaching.

As for Langsdorf, the 2016 season was one with some criticism. After being so predictable with much of his play calling and watching his defensive counterpart Mark Banker be fired after just two years, it is not crazy to think that his seat is getting warmer.

This will be a deciding year for not only Langsdorf, but the team as a whole. In the third year of the Riley-era excuses will be limited.

Langsdorf commented on how excited he was for the new class of signees to come in while also believing “Tanner (Lee) and Patrick (O’Brien)… duking it out for that starting spot will really make them better.”

There is lots of reasons to be excited for next year’s offense as it will look drastically different than offenses in the past. Many would argue that this is the year where Riley and Langsdorf should have their scheme fully implemented.

Husker Corner’s Brandon Cavanaugh compared Lee to former Husker quarterback, Joe Ganz, stating, “If you think that Ganz would be a fantastic addition to this modern day bunch of Huskers and a Lee-Ganz battle has a little more mystery to it, you’re not mistaken.”

So what does all of that mean? It means it is either mostly likely make it or break it this year for Langsdorf.

Now does that mean if the OC position Les Miles will be the guy to answer the call? One could hope, but the answer is likely, no.

At the moment, the most likely path for Miles to take is the one similar to Urban Meyer; Take a year off of coaching to work at ESPN (something Miles has not ruled out, either) and return the following year at the best open position.

He has the potential to be a great fit in Lincoln, however it is more likely that it will be from the stands than the sideline.

General, Opinion, Sports
One comment to “The Odds of Les Miles Coming to Nebraska”