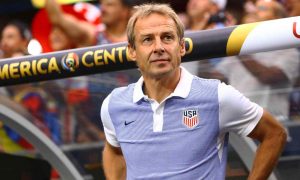 The worst case scenario has happened. The U.S. are dead last after two games into the Hexagonal round of World Cup qualifying and it certainly is for a lack of trying.

After being beat 2-1 at home to bitter rivals Mexico due to formation changing and lack of basic defensive techniques, it only got worse for the Yanks in San Jose Tuesday night.

Klinsmann went with the same exact lineup as the one that lost against Mexico (besides replacing injured Tim Howard in goal) while changing the formation to a 4-4-2. This was to absolutely no avail, however, as the away side looked absolutely empty of emotion and passion.

With compounding defensive issues, from lack of chemistry and communication to terrible marking, the midfield did not look much better as U.S. fans call for the dropping of Michael Bradley out of the squad.

Although a veteran, it is tough to think of the last time Bradley put out an above-average performance as every game seems to be the same lack luster performance. Whether it’s him forcing an obvious bad pass, not getting forward when the opportunity presents itself, not getting back to help defend, or simply walking from point A to point B while looking incredibly disinterested.

This isn’t the first instance of this, mind you. In fact, it was present back in the 2014 FIFA World Cup when Bradley gave away the ball and refused to sprint back on defense allowing for Portugal and Cristiano Ronaldo to score the tying goal in the last seconds of the match.

Sacha Kljestan? Perhaps. Lynden Gooch? Maybe, probably too young. Bring Geoff Cameron forward? Stoke City has done it, it might work for the States. Whatever Klinsmann (or whoever might replace him) does, it needs to be someone who is willing to be a work horse and not slack as much as Bradley has.

John Brooks also appeared to be completely out of sorts Tuesday, but can you blame him? His coach just roasted him after the Mexico loss, essentially putting all the responsibility on him.

And that brings up the final point: Jurgen Klinsmann. This is where it gets sticky.

Something that can be said, is that this team played the worst it’s played under Klinsmann Tuesday night. The same team we’ve seen play at incredibly higher levels under the same manager so by those facts the answer would be yes, Klinsmann is the problem.

Klinsmann is the problem because of the attitude of the players. This group has increasingly looked disinterested in playing for the German from begging to change formations against Mexico to negatively responding to self-imposed criticism.

So does he get fired? Who knows.

You would think that losing to Costa Rica 4-0, losing to Jamaica in the semis of a Gold Cup, blowing up against Guatemala, and losing to Mexico in the CONCACAF Cup, the answer would be pretty straight forward. Unfortunately it’s not that simple, and it’s essentially all up to the federation’s president Sunil Gulati.

When asked about Klinsmann’s future, Gulati told Grant Wahl of Sports Illustrated, “We won’t make any decisions right after games. We’ll think about what happened today and talk with Jurgen and look at the situation.”

It looks like a lot of grey area for me.

What shouldn’t be grey is what we need out of our manager. We need a stern, motivating expert who would not allow for any slacking and has a set plan. Should he be an American? Well, it wouldn’t hurt would it.

The most likely replacement candidate is an American, and it’s LA Galaxy and former U.S. manager Bruce Arena. Arena last managed the U.S. in 2006 after an 8 year reign in which he was able to take the Yanks all the way to the 2002 World Cup quarterfinals only to barely lose to Germany after a great performance and some controversial calls.

However, Arena was also fired in 2006 after a group stage exit and various tactical criticisms. Seems oddly familiar.

The Americans don’t have another qualifier for another 4 months so there will be a lot of time to dwell on this devastating result; it would also be a bit of time to get a replacement manager in and implement his system.

If the federation is going to make this decision it needs to happen sooner rather than later, otherwise the situation could get much worse. No matter what, it will be on the players– and yes even the captain Michael Bradley– to gather themselves and get to the World Cup in Russia.