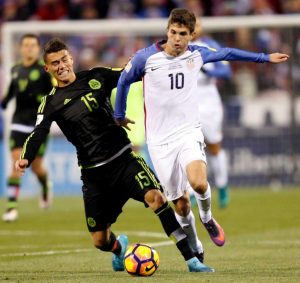 Pulisic was a shining star in Friday’s match, seemingly always trying to get forward. Photo by Jay LaPrete, AP

Three days after one of the most heated elections of modern times, the United States lost 2-1 to Mexico in Columbus.

After a week-long hype mission by American supporters with rally cries of another edition of “Dos a Cero”, it all proved to be for nothing as the Yanks lost on a set-piece header from nemesis Rafa Marquez in the 89th minute.

Although a typical U.S.-Mexico match in which fouls were littered all across the pitch, an added frustration was put on American fans plates as manager Jurgen Klinsmann fiddled with a 3-at-the back formation that proved to be a mistake.

“We trained that [formation] and it went really well in training.” Klinsmann said.

This formation only lasted 20 minutes as Mexico scored and the formation was quickly changed. Strangely enough the formation was not changed immediately by Klinsmann; in fact it took captain Michael Bradley and Jermaine Jones to convince Klinsmann to make a switch– or so it seems.

“I think ultimately [the decision to switch the formation] was among us all,” Bradley said. “It was clear that it made sense to change.”

Luckily enough for the Americans, the switch paid off, especially in the second half.

The change in formation made for more solidity and less space at the back, while allowing the forwards to push and join the attack.

The climax of this change was seen with a Bobby Wood goal in the 49th minute.

All the efforts to salvage an important point at home was lost with a purely unacceptable goal in the dying embers of the game.

About every one of the 25,000 fans in Mapfre stadium were stunned how the U.S. (a team made up of professionals, mind you) could allow for the back post to be completely empty on a corner kick; a simply elementary mistake that allowed for the States to leave Columbus with no points headed to Costa Rica.

This result left American supporters with one question for coach Klinsmann: Why?

Why implement a new system when not necessary and against a team with such great attacking power? Why was the back post allowed wide open in the 89th minute on a corner? And after Klinsmann said he wasn’t against using the 3-at-the-back system again on Tuesday, why can’t you accept your defeats and not be stubborn when it comes to strategies?

Sure the answer seems simple now, as hindsight is 20/20 but it seemed relatively obvious at the time that against Mexico one would go with the system that has traditionally won you games.

Not all is lost, in fact, this is only the beginning of the Hexagonal round of qualifying.

Keep in mind, there are positives to be taken away from this match. Like Pulisic embarrassing Mexico’s golden boy Chicharito in a one-on-one battle, Bobby Wood and Jozy Altidore proving to be a dynamite combo when used right, and Jermaine Jones still having the fire that has defined his career.

Will all that be enough headed into San Jose on Tuesday, though? That question will be a tough one to answer as every away qualifier in CONCACAF is a struggle in its own.

To win, the U.S. will need much more fire than they had against Mexico and perhaps some help from Klinsmann formation-wise. If Bobby Wood and Jozy Altidore can be used right together, the Yanks could potentially sneak away with 3 points.

In the end, the sun rose on Saturday morning and there’s still plenty of time for the States to bounce back and qualify for Russia. The road doesn’t get any easier and it will be up to Klinsmann to rally the troops for the next year’s worth of qualifying.