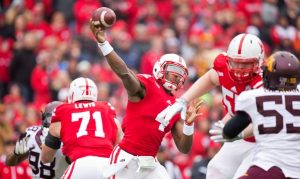 Nebraska is desperate for a win Saturday against BigTen West foes, Minnesota. Photo by Omaha.com

After a brutal 62-3 spanking in Columbus last Saturday, Nebraska are desperate to bounce back against Minnesota and return to winning ways.

Having given up a ridiculous 590 yards against Ohio State, the Huskers defense will be critical in deciding whether or not they come out on top.

With Tommy Armstrong’s status still uncertain 24 hours ahead of kickoff, a lot of responsibility is put on the rest of the team. Armstrong returned to practice late in the week and only participated in light diffifculty situations, leading the possibility of a Ryker Fyfe-led offense to be likely.

Coach Mike Riley confirmed no serious injury was suffered against Ohio State after a frightening sequence of events that eventually led to Tommy Armstrong going to the hospital and then returning to the sidelines.

“We’ll do everything as if he’s playing,” Minnesota coach Tracy Claeys said. “He really does make their offense go.”

And that Armstrong does. After his injury, Fyfe came in only to throw 5-for-18 and one interception, however he looked far more underprepared.

“There’s no excuses,” Fyfe said. He also stated that he will continue to practice as he does every week: as if he will get in regardless of the situation.

With a lot of uncertainty on offense, there will be a large spotlight on the blackshirts to bounce back and return to their early season form.

“There wasn’t any jogging around or bad attitudes [when the Huskers returned to practice this week],” linebackers coach Trent Bray said. “I think our guys will come out and play hard, and that’s what we’re working on.”

Contrary to teams under Pelini, these group of Huskers have proved they can handle and respond to adversity– a theory that was put into serious doubt when they were beat by 59 points last week.

According to the defensive coaches, the biggest keys on defense will be “stopping the run game” and “controlling the line of scrimmage”.

Coming into Lincoln with a 4-game winning streak, the Golden Gophers sport an identical 7-2 record with loses to Penn State and Iowa. With sophomore running back Rodney Smith lighting up Minnesota’s offense, an added pressure is put on the blackshirts’ front line to come up with big stops on second and third down.

No matter how Minnesota attacks on offense, the Huskers’ defense cannot allow 11 third down conversions like last week if they expect to come out on top.

Don’t let last week’s performance fool you, Husker fans. There is going to be growing pains and this one happened to be the worst of the worst. Riley and staff has instilled too much into this group of guys to let this tail-end of the season slip away from them.

Expect a tough fight in Memorial Stadium Saturday night, especially if Tommy Armstrong Jr. remains on the sidelines as this Minnesota team is far from a walkover. To win, it will come down to defensive stops and a stand out running game for Nebraska.

17-7, Nebraska in a low-scoring defensive battle.