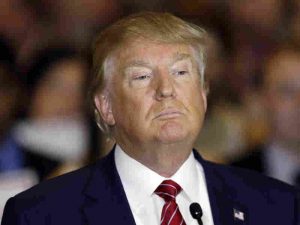 On November 9, 2016 Republican candidate Donald Trump was elected as the 45th President of the United States. Due to various policy promises over his campaign, some soccer fans are left curious as to how the climate of the sport could shift in the States.

Immediately after the election, many conclusions were drawn and speculation consumed the Trump administration before the president elect even stepped foot in the White House.

All politics aside, a new president has rarely effected the world of American sports as traditionally there has been a separation-of-church-and-state (disregarding the pause of play during the World Wars). However, in the case of this election and the current model of American soccer, a potentially fragile state of existence has developed.

The Fact of The Matter

The fact of the matter of this: Donald Trump built his campaign on statements promising the deportation of illegal immigrants and creating a “great wall” between the United States and Mexico. As a result, the large population of Mexican-Americans (a population that makes up a massive portion of soccer fans and players in America) have grown wary and in some cases angry.

Whether or not any of these plans will follow through or what their effects will be is still a matter of time, but nonetheless a large portion of Americans of all backgrounds feel their is potential for a large change in the near future.

Proof of this can be seen by Mexican broadcaster Azteca quoting Trump in a U.S.-Mexico promo to stir patriotic fervor and motivate the squad’s supporters before the Confederation’s Cup play-in game in Pasadena. Along with this, many current MLS, American, and even top-level European players tweeted their disapproval in the final results. 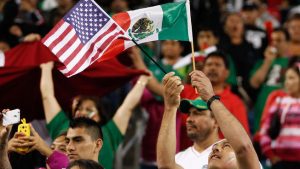 A Mexico fan holds up the flags of traditional soccer rivals at CenturyLink Field in 2013. Photo by Getty Images

What Could This Mean?

In the immediate future, this could mean high tensions in the stands on Friday’s match up in Columbus between the two sides and for future matches to come, as if this rivalry needed any more heat. Mix in alcohol with a high pressure situation after a pivotal event like this; the likelihood of violence in any sporting event could be high.

It also could be a moment of relief, as this game could symbolize the coming together of two nations in a time of uncertainty permeating across the continent. It all really hangs in the balance.

“I would hope that they give every person in that stadium the respect that they deserve,” U.S. captain Michael Bradley said. “Whether they’re American, Mexican, neutral, men, women, children.”

Michael Bradley was far more open to the political conversation than goalkeeper Tim Howard who claimed the game had nothing to do with politics.

“We have an obligation to come together,” Bradley said. “To get behind our new president and to have faith and trust that he will do what’s best for the entire country. That’s what we’ve always done.”

As far as MLS is concerned, doubts could now persist with big international names coming to play in the States. This was seen by Bayern Munich and Spain star Javi Martinez tweeting about the potential “end of [his] @MLS dream in the future”. Martinez was not the only one to feel this way as England and Manchester City player Vincent Company tweeted his disapproval as well.

But most of all, the doubt greatly lies in the Mexican-American community.

Mexican players like Giovani dos Santos have come to MLS drawing massive Latino crowds, only improving the game in the country. If players like dos Santos feel even the slightest bit unwelcome, there will be no way that we get the likes of fan-favorite Chicharito, a name that has been the top on many MLS clubs’ list.

What To Take From It All

As stated, so much of this worry is based off of speculation and the creation of mass concern in a time of great uncertainty. One cannot give a proper review of a film if the cast has not yet even been named.

In a sport so peculiar and so unique as soccer is in the United States, a large portion of its survival relies on the fans in the stadium.

Who knows, in the end Trump could end up being a fantastic thing for the game in the U.S. as he has some history with the sport. From playing varsity soccer in high school to even having interest in buying one of Colombia’s largest club team Athletico Nacional.

It’s still very early to predict what impact Trump’s presidency will have on the sport, if any, but the immediate effects will be felt Friday night in Columbus, Ohio.