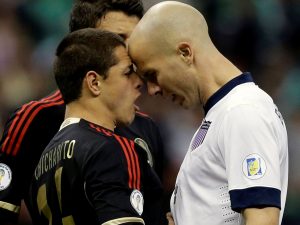 Mexico, U.S., Columbus. That’s all you need to know for Friday night’s match up on FS1 at 8ET.

World Cup Qualifier or not, this game is always massive; and perhaps with both teams in relatively good form, we will see another barn burner.

For the U.S., Jurgen Klinnsman brings in the striking combination of Jozy Altidore and Bobby Wood along with youthful additions Lynden Gooch and Christian Pulisic.

On the Mexican side, Juan Carlos Osorio picked probably the strongest side since Copa American Centenario with a high likelihood of running 3 at the back.

But like any U.S.-Mexico game, this one’s a toss up. American fans will say that history is on their side as they look for an eighth “dos a cero” since 2001 (and a fifth in notorious Mapfre Stadium alone) while Mexico fans will say that nothing can stop Bayer Leverkusen’s goal scoring machine Chicharito.

There is something to be said on the American side though: it’s in Columbus. The Yanks have been seemingly unbeatable when playing El Tri in probably the toughest place to beat a US team if you’re in green.

With the injury to Jordan Morris in the MLS playoffs comes LA Galaxy’s Alan Gordon, a potential super sub for Klinnsman. Although only two national team appearances and no goals for the 35-year-old, Gordon could really play a key role in the final minutes if the U.S. need to put the game on ice.

Jermaine Jones, a Klinsmann favorite, also made the 26-man squad despite recovering from a recent knee injury. This could prove to be a brilliant decision by the German as Jones has seemingly never played a poor game in his system and always brings a much needed energy– one would hope not too much energy however, as he has been prone for red cards.

Tim Howard will also get the nod in goal after a fantastic playoff performance in a penalty-shootout win against LA at the weekend. A great performance would be expected and perhaps needed from the 37-year-old who always seems to show up in big games.

As for Mexico, expect a solid backline anchored down by villain Rafa Marquez. Andres Guardado and Jonathan dos Santos could prove to be the danger men as Gio dos Santos will have to recover from a missed penalty kick that cost his LA Galaxy a Western Conference Final berth at the weekend. With this team under Osorio, it’s anyone’s guess how they line up and preform for that matter as they have experienced triumphs over Uruguay and trashing 7-0 defeats to Chile in their last competitive competition.

Whether it is being hyped up because of the election on Tuesday, the fact it is in Columbus, or just simply because it is the start of “the Hex” in World Cup Qualifying it does not matter. This is U.S.-Mexico and it is going to be fast, rough, and heated.