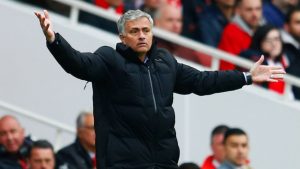 Is Jose Mourinho already on the hot seat at Man United? Photo by Julian Finney, Getty

17 matches into the Jose Mourinho-reign, Manchester United are statistically worse than   the Moyes and Van Gaal teams the same age.

So does this mean this team is actually worse than those teams of failed managers?

Yes because according to the numbers they are in fact a worse team and no because there’s a lot to take into consideration.

For starters, preseason was a disaster. After beating a poor Wigan team, getting thrashed by Borussia Dortmund in China, having a match cancelled due to lack of match-preparation, and a Zlatan Ibrahimovic headlined 5-2 win over Galatasaray, this preseason was anything but orthodox. This is important because this preparation period is so important to Mourinho. The same Jose Mourinho that explained to adidas’ Front Row how 2016’s China tour would be very important “from a human qualities point of view”.

Perhaps Mourinho’s chemistry building potion wasn’t given enough time to take effect as the season started off with loses to the likes of Manchester City at home, Watford away, and a 4-0 thrashing away to his ex-club Chelsea.

So is this team worse than what it should be? Of course.

With the likes of world record signing Paul Pogba producing barely above-average performances once in a blue moon and Wayne Rooney’s future in severe doubt, there really is more problems than positive talking points at this point in the season.

With the first semester of the season drawing a month-from-close, at least 7 out of the next 11 competitive matches should be victories. Thats the key word though isn’t it; should.

In this era of hire-and-fire management in football, time should be given for Mourinho to make an impact but the question is, how much time?

It would make sense that by the January transfer window a manager should have a good feel for what squads will work best for what games. That being said, Mourinho should begin to really feel the heat if United isn’t in fourth place by January 1.

Although a Premier League manager’s life can be short, they must face the facts of the time. If Manchester United want to get back to the glory days and win title number 21 and beyond, it will have to come from a manager who can win the games he should win.

For Mourinho, there have been a lot of games dropped that should have been smash-and-grab jobs. However, only time will tell if the special one can make Manchester special again.